At The Mill Restaurant + Pub in Cobourg, community comes first.

Historically, grain mills were the building blocks of new settlements. Centuries ago, for new Canadian settlers, it was a distinct advantage for farmers to settle near a working mill, where their ‘grist’ could be ground into flour. The water-powered mill in Cobourg is one of the reasons why Cobourg has thrived for the last 200 years.

The Mill itself, built in 1830, has retained much of the historic charm that the area is known for. It’s changed hands many times in it’s 200 year long history. It almost burned down once. Another time, a flood almost washed it away. During the hay days of Red Fife Wheat, folks would come to the mill to have the Pratt family grind their grains for them.

Today, The Mill Restaurant & Pub offers unique dining and golfing experiences in the heritage space. In the kitchen, they craft dishes focusing on seasonality and availability of local products, riffing on the classics and comfort foods clubhouses are known for.

It’s a gathering place for people who live in the region.

They come, they play, they enjoy the food – but it’s beyond the walls of this traditional space, at the Culivate Food & Music Festival, that we got to know this busy crew.

The Classic Burger at The Mill is their most popular menu item – and rightly so! It’s 6oz of lean ground Silver Creek Farms beef, hand formed and charbroiled with classic toppings.
The food philosophy at The Mill is pretty simple: to proudly serve Ontario food & drink.

It’s a philosophy Chef Isaac Meadows has held for his entire career. “For us, it’s about accountability for restaurants” he says when we ask about why Feast On matters to a restaurant so steeped in heritage and tradition. “Anyone can say they’re using local ingredients, but doing it is different.”

At Cultivate, this year, they’re serving their signature Silver Creek Farms burger with homemade pickles. They’re also grilling up Northumberland County corn to order. “It doesn’t have to be complicated to be delicious” said one of their staff.

The Mill shows up and serves food at Culivate, year after year. It’s a community event in Port Hope and they’re big on community at The Mill. Their team mans their booth with pride and serves up food they know the crowd loves because the crowd are their customers. People who come back and seek them out – where ever they pop-up. 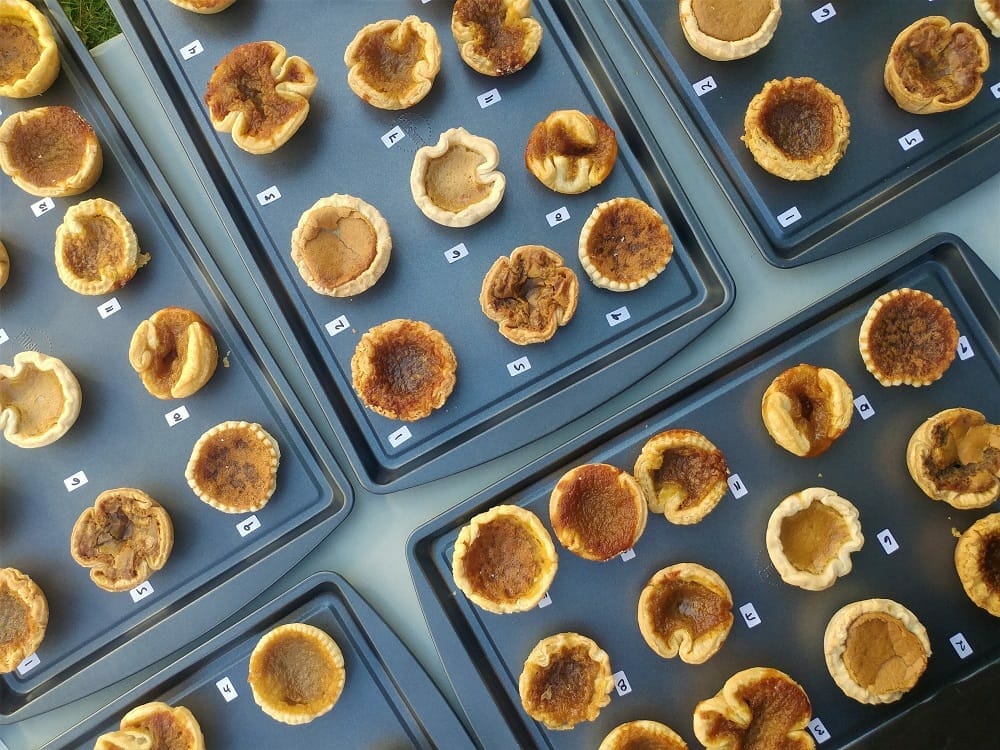 It’s a hard job, but someone has got to do it. The Kawarthas Northumberland Buttertart Taste-Off happens every year as part of the Culitvate Festival. Dozens of tarts compete for the top prize!

It helps that their Front of House Manager, Amelia Bray, is one of the founders – but “honestly, we’d be here regardless” said their staff when we stopped by their booth on day one of the festival this year.

Cultivate is the brain child of Jeff and Amelia Bray. It’s a big picnic; a music festival; a playground for all ages. It’s been voted Best Culinary Tourism Event in Ontario – more than once.

Amelia and Jeff wanted to create a food culture driven by community and the people growing food in the region; but also attract musicians to the region. It’s a weekend of live music, cooking demonstrations, food and plenty of craft beverages.

The Cultivate Festival happens every year in Port Hope during the third weekend in September.